Last week’s Sim Work Night turned into a CAD exercise on the 3d Model of Canterbury.. so not much to show!
This week is a different matter. I started the process of swapping out the flight controls in the Skyhawk a couple of weeks ago, and this week I made some serious progress!

The mechanic’s of the stick were all stripped down and cleaned, then I ripped apart an old Logitech ‘Attack 3’ joystick and salvaged the circuit boards inside it. Now I have the stick extended, and interfaced with the Logitech boards. For now I have wired only the switches I intend using, as the stick has more buttons than the Skyhawk grip anyway!

The stick shaft has been extended 100mm, which give a travel which feels about right, and now has a nice offset to make it fit in your hand nicely.

With the Throttle and Stick Rewired I tested the various axes and switches, and all worked fine!
The next step in the build is to design a pedestal to support the stick at it’s right height, incorporating an enclosure for the various boards cables and connectors, then make a suitable mounting structure for the Throttle. Part of the mount will include adding a Flap switch to the structure so that it is located correctly (finally) For now the Throttle doesn’t have any buttons interfaced, that is for a later time!

COVID-19 has bitten hard, with NZ going in to lock-down tomorrow. So tonight’s Sim Work Night was pretty quiet. After spending the afternoon converting the ManCave into a temporary work office, I decided that I still needed to do something on my sim. So tonight I did some messing around with displays in the Skyhawk, and a cool tool for ‘storing’ and ‘restoring’ panel positions. This means that I can fine tune the positions of all of my undocked panels, an recall them whenever I need.
This application has changed my plans for how I will “build” the virtual panel for the sim. Instead of building a single panel, with all my gauges on it, I will make individual panels for each gauge which I can then move and size to fit the panel. Then I can use these cool apps to store the positions.
I also *temporarily* pointed the projector lower to align with the HUD. This is until I design and build new legs to bring the height up to where I now want it.

The Skyhawk has been without flight controls now for quite some time, and that is a bit of a hindrance when it comes to flying. I have thrown around a couple of ideas for curing this, from re-instating the old Saitek stick, through up-cycling my Cougar HOTAS to the extreme of building a representation of the real A-4 stick mechanism. Tonight I had another good idea, which is a sort-of half-way solution; I would modify my Suncom F-15E stick and throttle. The ‘Talon’ as it’s known is a reasonable match for the Skyhawk stick, and a pretty good facsimile of the Kahu throttle, despite being a twin-lever setup.
First step was to remove the Cougar, and return it to it’s former use as my joystick of choice for flying VR, then it was time to pull apart the Talon, rip out all the bits I wouldn’t need, and modify the stick base to fit into the cramped space of the ‘pit.

De-construction of the stick went well, with all the circuit boards and wiring removed and the gimbal mechanism and stick grip isolated. Next it was out time for gratuitous use of power tools to cut the base body down to size, then re-assemble the new base and try it out for size.

With the stick base in place I measured up for a mount and a shaft extension to bring the grip to the right height.
Up next in the workshop of horrors was the throttle. This didn’t need any where near as much work, as it was pretty close to what I needed anyway. Once again I removed all of the existing wiring and circuit boards then test-fitted it in the sim. The throttle is pretty close to the right shape and size as the Kahu throttle needing just a couple of switches changed to make it a fairly good replica.

The final part of the nights work was to clean up the quite considerable mess I’d managed to make, and dispose of the evidence of a night of simulator carnage!

I’ve been searching for the right lights to go on the wall in the ManCave for a long while now. After many searches on the internet, and even visits to local lighting and hardware stores I hadn’t found anything that was quite right. An unrelated search on Aliexpress one night turned up some nice looking ‘Bulkhead’ lights, but were a bit pricey for what I wanted, but it started me thinking again about local alternatives. Bunnings to the rescue! They had a pretty good range of industrial-looking lights at reasonable prices, so a quick trip to the store, and $25 later I have a pair of ‘Bunker’ lights… even the name sounds appropriate for the ManCave!

These two lights will replace the halogen spot lights in the middle of the ceiling (which may stay as ‘work’ lights) and will either gain a dimmer, or switch to RGB LED.

Tonight while quietly sitting on the couch I had a great idea about using another PC in my ‘virtual ship’ setup… This second PC would be a surrogate for Canterbury when I arrived at a location and deployed the RHIB. This would mean that the surrogate would take on the identity of Canterbury while I used the TACOPS PC to simulate the RHIB (or any other support vehicle). All of this would mean that I could leave Canterbury on other adventures, yet she would remain persistent in my virtual world.

Tonight I connected the MIP monitor in the Skyhawk up, via an HDMI to VGA downscaler and had a wee test. 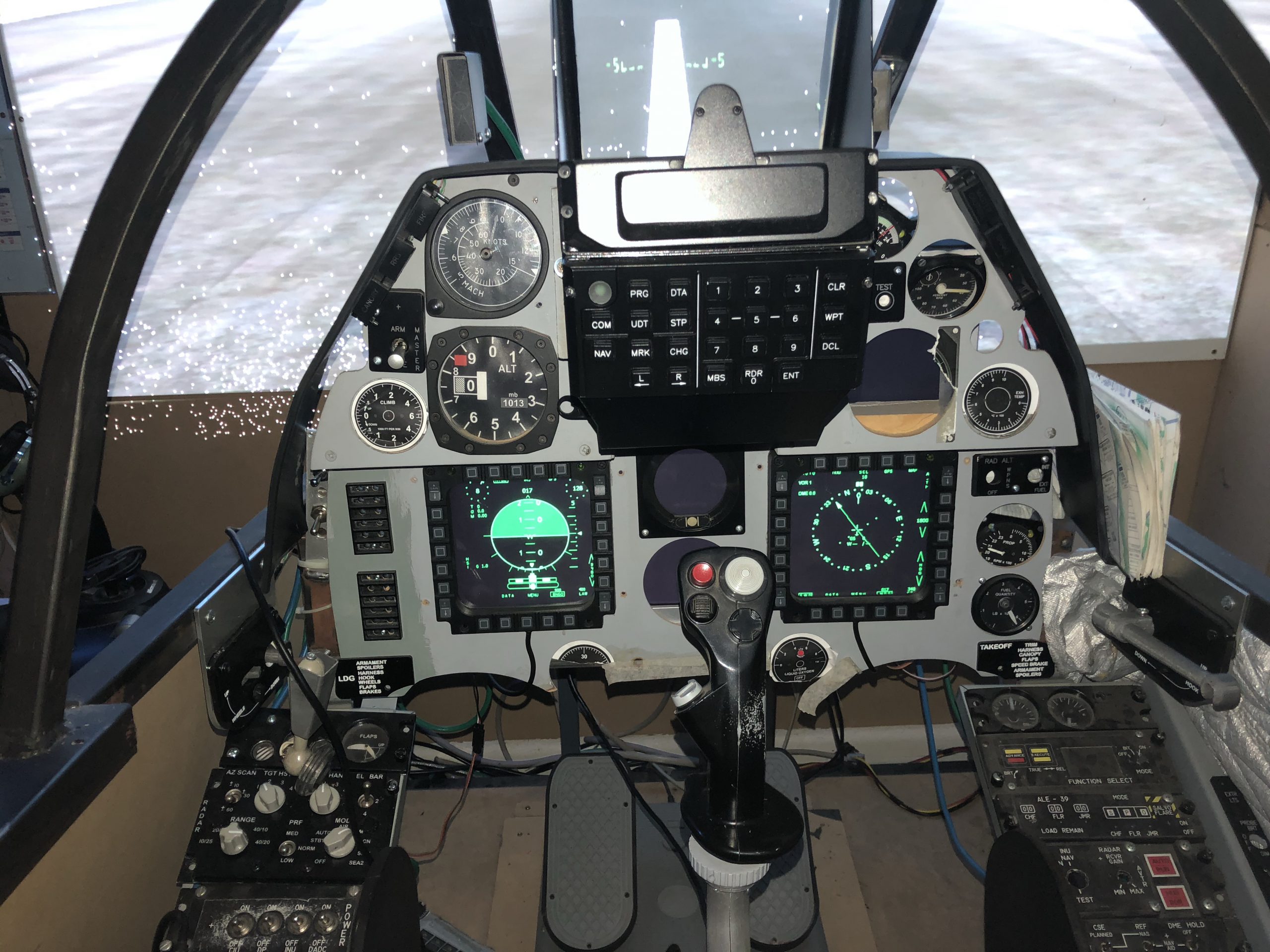 This was using the TACPACK powered T-45 model and avionics, which I will be using as the initial test bed for my TACPACK integration. 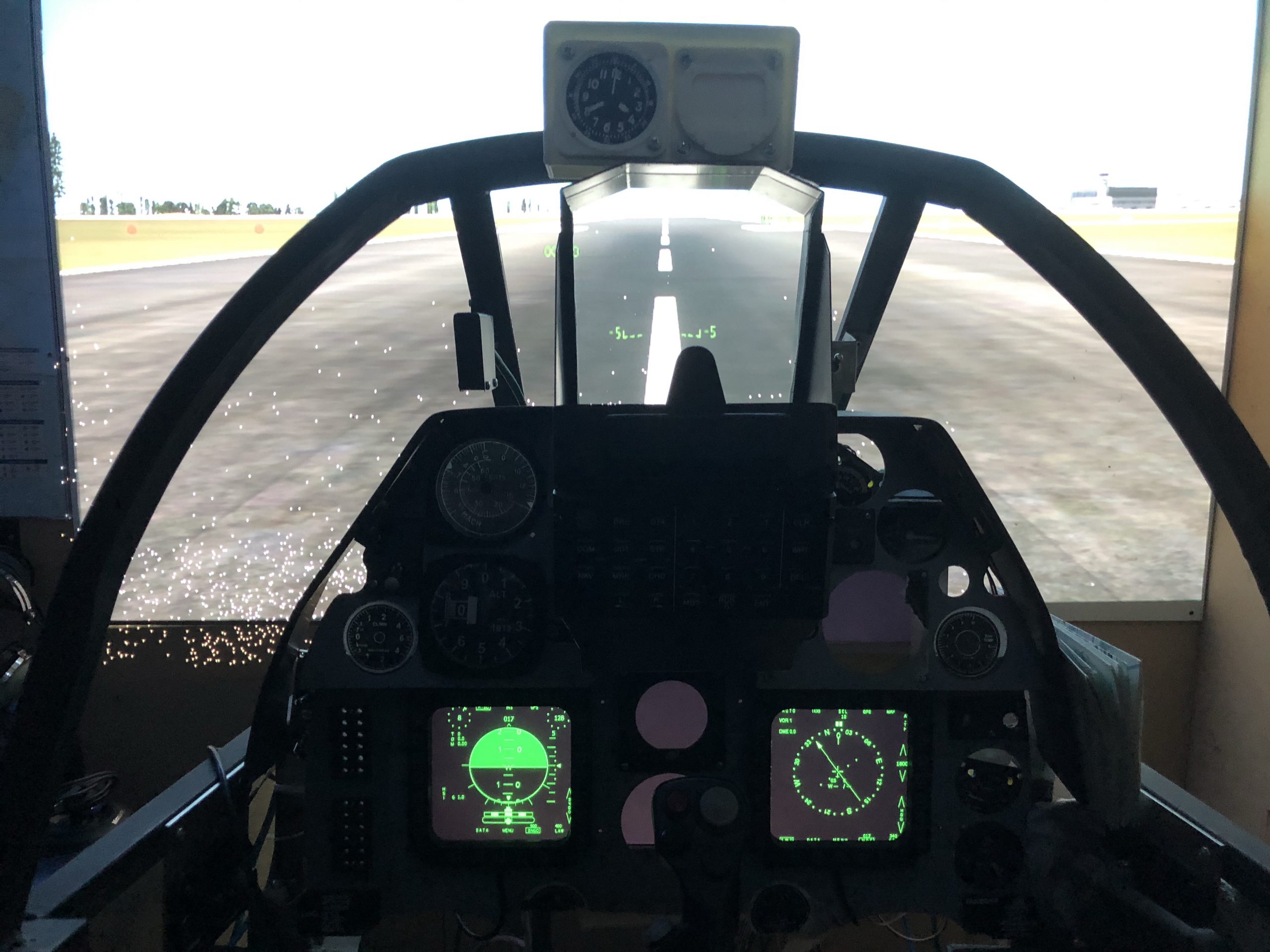 It looks quite smart, even just at this stage. Can’t wait to fly it again!

Skyhawk night tonight, and it was all about the visuals. Turning the cockpit around meant that the projector and screen needed to do the same. Re-instating the projection system also meant moving the sim sideways to centre it on the projector screen.

First step was to remove all the junk lying around, then to measure up for the changes. Nathan was my helper again, unscrewing the fittings for the ‘Do Not Cross’ tape.

Moving the sim sideways was not a huge challenge, but moving and reattaching the screen was a mammoth task. I have elected to mount the screen slightly higher than it was previously, with the aim of raising the simulator up, making some space under the floor for electronics or computers (or maybe storage)

My projector mount is a basic slab of MDF with a swivel projector mount screwed to it. With plenty of dimensions taken it was a reasonably simple job to remount the panel in it’s new location, attach the projector and re-run the power and signal cables, at least temporarily. With everything connected it was time to see if the projector/screen relationship was correct. The best way to do this of course was to fire up the PC, and FSX… which led to a wee test flight 😉

After a successful test I did a little more tidying and sorting, then *finally* re-routed and shortened the hideous LAN cables which have been lying across the floor for ages..

After the recent PC re-shuffle, and the major ManCave redevelopment, Canterbury has been busy sailing the Northern seas. She has been as far North as North Cape, and Murmansk in Russia, and now has made the trek South to the Mediterranean where she is enjoying much nicer weather.
I thought I’d post some screenshots of the trip so far.

With a $6.88 roller kit from Mitre10, and an idle hour or so this afternoon I got a little more of the ManCave wall painted. It has been languishing in it’s natural MDF tones for many years while my decorating plan slowly evolved. Now with a bit more of an idea of what I want it all to look like I was keen to get some colour on the wall to finish that side of the room.

After a couple of coats, and some touch-ups on the existing paint I hung a couple of things up, put all the furniture back in place and moved Susan closer to where she will end up standing once everything is completed. I have to say that I am happy with the result. The next decision is what colour(s) to paint the walls around ’58. The options look like; continuing the green to a point, painting it all black, or maybe even a sky-ish blue… which would be a good backdrop for selfies…. 😉 Still, no hurry to decide.

Today the glass for my display cabinet arrived. Despite it being clear glass it really makes a difference to how the cabinet looks, pulling it together as a single unit.
With this complete, and the ‘coffee table’ just needing a glass top, the ManCave is starting to look pretty cool!

With the space taking shape I have changed my mind about painting the Coffee Table, it now looks in keeping with the display cabinet, sort-of Industrial, sort-of rustic? I will add some stencils to it, again to make it match in.