Monowai is making progress on her delivery voyage. Having left Glasgow on Sunday, she stopped in London for a brief visit, and has now made her way back down the Thames and is heading for her next port visit in Gibraltar.

It has been interesting comparing the relative rate of progress of Monowai, at 14 Knots, to Canterbury.. The trip ‘home’ in Monowai is going to be a long, long journey!

After Monowai had left the Thames, and was safely on Autopilot I headed up to the loft to try and sort a PC issue with the 737 sim. After a wee bit of tinkering I got it up and running, and even had a short flight. Motivation suitably restored, I am once again looking forward to getting it shifted to it’s new home and doing more flying!

Long long ago, a friend built an incredible B200 Kingair simulator. He eventually sold it, and through a series of events I ended up helping maintain it for the new owner. The simulator has had a series of upgrades in the intervening 10 or so years, and now sports a flash new Garmin G1000 cockpit setup. This is a long way of getting to the point of this post, but we are getting there… I promise! With the new Garmin suite up and running successfully for a few months, Steve (the now owner of the sim) offered me any of the left-over bits from the upgrade… this included the 6 radios, which were based on GoFlight’s radio technology, but in a ‘remote mount’ setup. I jumped at the opportunity, as I am a fan of GF’s tech. Fast forward a couple of months, and a deal has been made, of the ‘brown bottle’ type, and I have 6 working radios here.

The radios are currently set up as ‘Collins’ radios, with over/under frequencies. I hope to convert the digit boards to side-by-side and build some ‘737 Classic Style’ radios out of them.

Another evening of ‘doing stuff in the garage’ tonight meant some more work on the 737 Linings.

I’ve put enough fasteners in to hold it all in place so that I can plan the structure to hold it up. As I’ve said before; I want the sim to be fairly modular, so that I *could* move it in pieces, but mostly so that I can remove parts of the sim to work on outside of the confines of the enclosure it will be built into.

As part of the development of the 737, there will be a big renovation of the ManCave. For a start the 737 sim will be coming downstairs from the loft. The main reasons are access and temperature; not only is it hard work getting to the sim, it’s also too cold in winter, and way too hot in summer. The 737 will be just outside the current ManCave door, and mounted on casters so that it can be moved around to be worked on. The rest of the ManCave will have a shuffle with the TA-4 being turned 90 degrees, and going purely VR, while the ‘Instructor Desk’ will become more of a general purpose desk and be moved against the wall.

You can see in the render that it is a very cozy space, but with some careful and creative design I think I can make it all work and make far better use of the space than I do currently.

With the move downstairs of the 737 sim, I hope to turn the loft back into a useful storage space again, and recoup more space in the garage than the 737 sim will take up.

Tonight I had a wee play around with my 737 side wall and linings to try and figure out whether the ‘side wall cut’ was above or below the bottom of the interior linings. Finding this out is important so that I can figure out how I will eventually mount the side wall structure to the floor.

After a small experiment it appears that the cut line is almost *exactly* at the bottom of the liners, and importantly, is level. This makes my life much easier when I come to designing the mountings as I have a nice flat base to start from.

A couple of cool deliveries today, both for the 737. First, I bought the captain’s side wall structure from N615SW, a 737-300 which was cut up at work, which will be used to form the side structure of my sim. I had always planned on making the sim modular, and was going to have to measure and construct a frame for the side wall, but when the opportunity to buy a real section came up I jumped at it.

The side wall will be mounted on a plywood or MDF base, with the linings attached, and a structure at the base to replicate the cable tray on the floor (which I also have the cover panel for)

The other delivery was from Aliexpress; the 10.1″ screen for my engine display.

The display was nicely packaged, and was very quickly and easily connected up for a test run. An old laptop provided the graphics, and it looks awesome. The display driver board is USB powered, and came with a USB cable, so very easy to power from the host PC. I hope to get the display installed into the panel tomorrow night for a test flight!

After a bit of measuring, researching and pondering I have ordered an LCD panel for the Engine Displays. The range of sizes, aspect ratios and resolutions available is truely staggering, but I managed to find a screen which *should* be a near-perfect fit, a 10.1″, 1280×800 should do the trick…. watch this space! 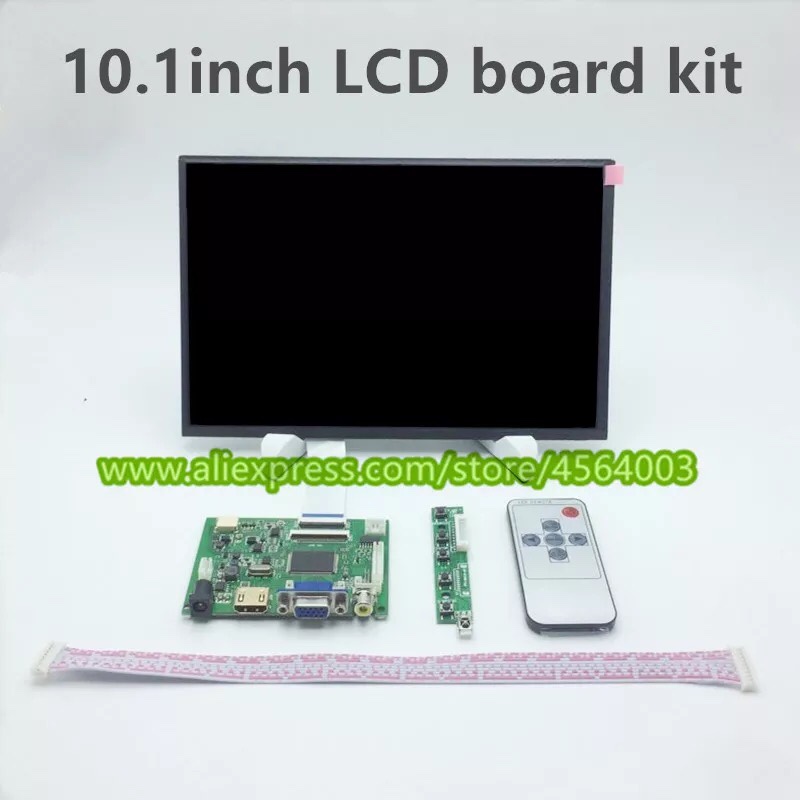 I have been messing around with various versions of, and setting for Project Magenta’s EICAS display, and found an *old* version which will do just what I want… 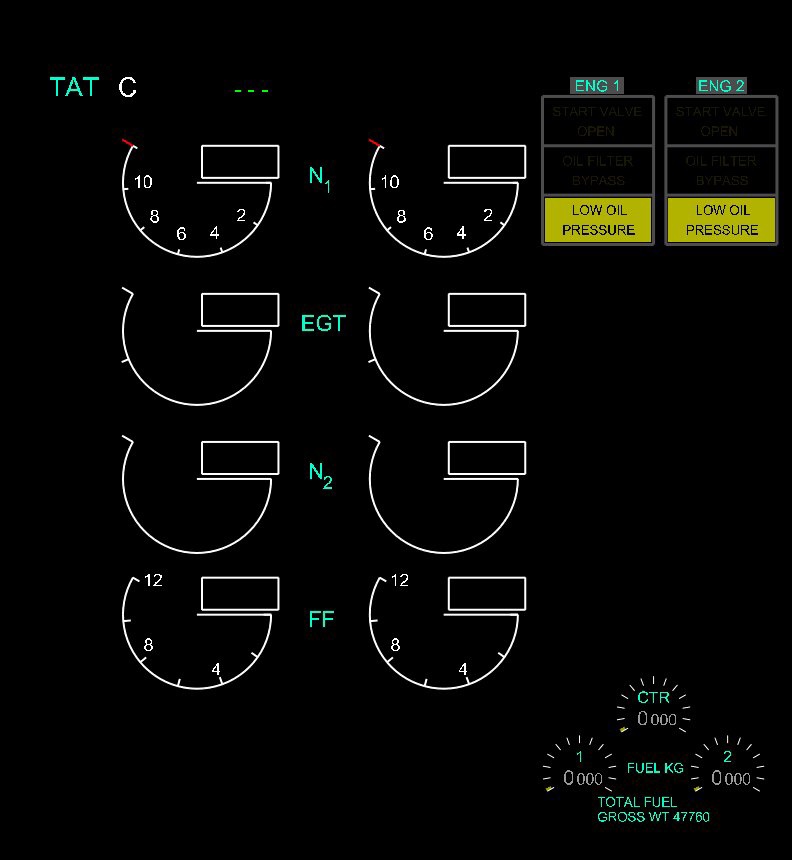 This which is a compact 737NG upper-DU display, with a suitable bezel over the front, will work nicely as a substitute for a classic engine display.

Having a pilot seat in the sim is pretty cool… and a whole lot more ‘user friendly’. Tonight I flew one of the REFORGE flights down to Goma in the DRC. 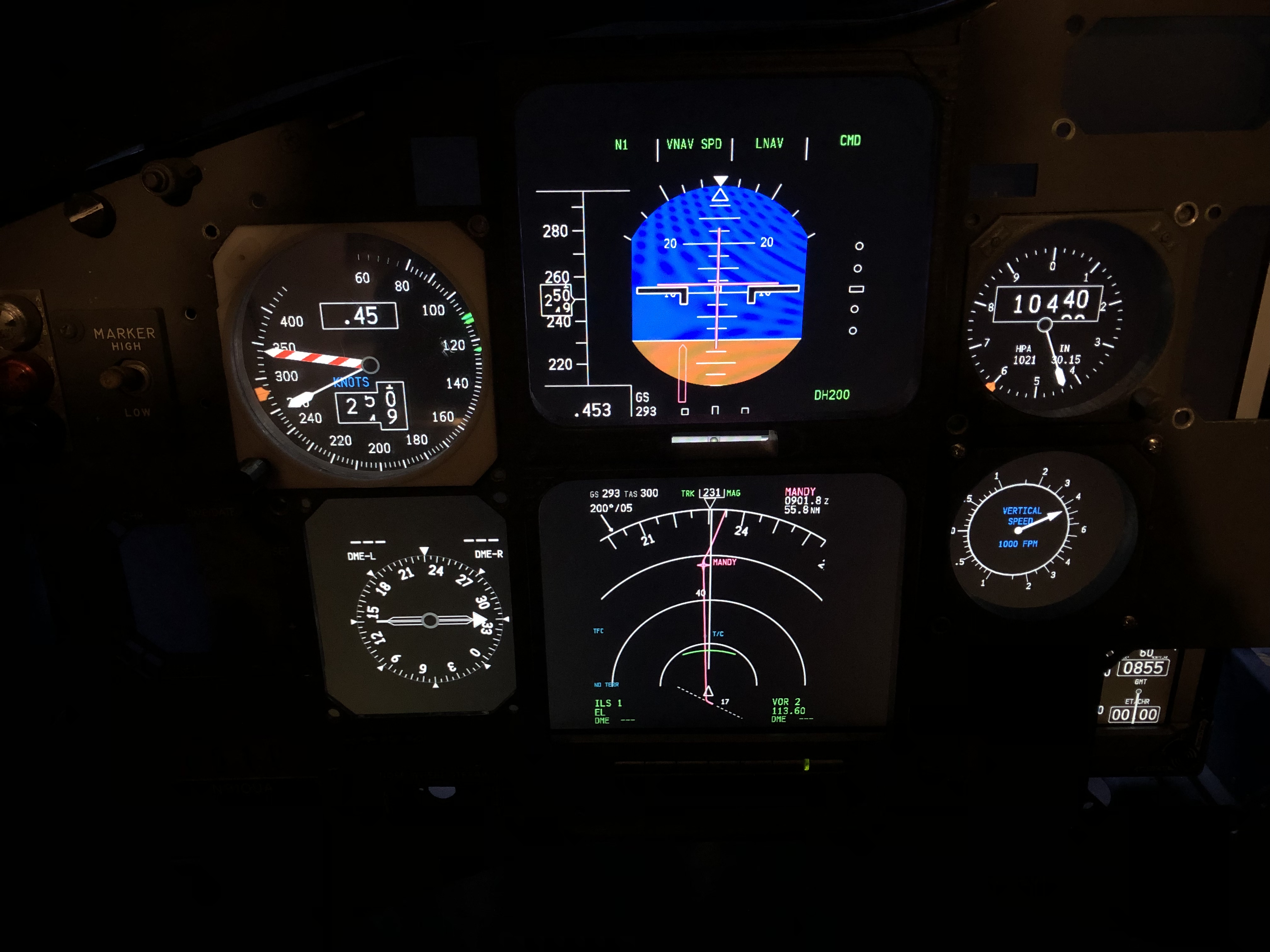 I also took the opportunity to update the avionics software in the sim, which all worked perfectly.

The weather in Africa is challenging, with cloud and bad visibility appearing to be the standard. 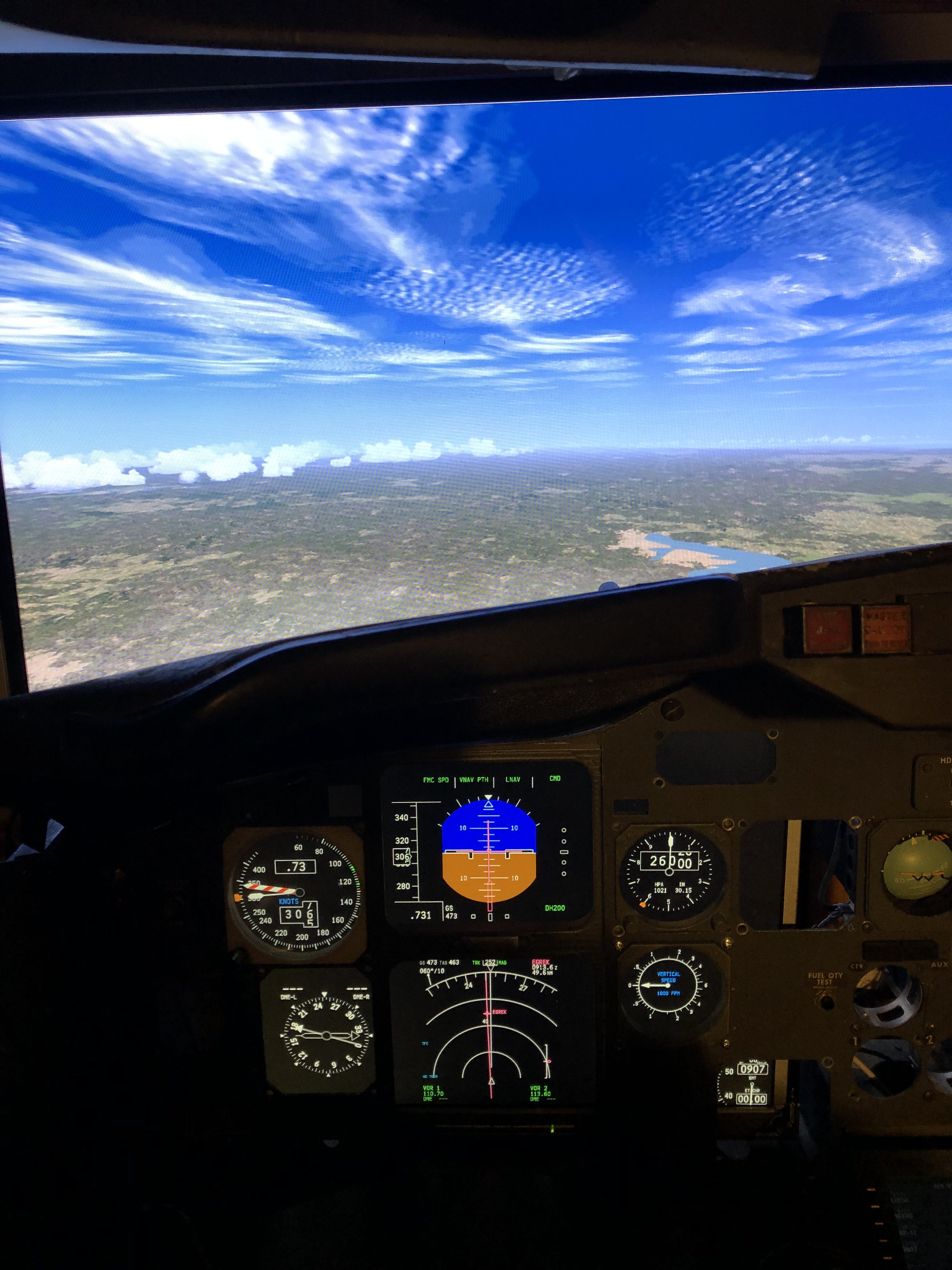 Occasionally though, there were clear patches and the views were pretty spectacular!

After a low visibility RNAV arrival in to Goma I shut down for the night. 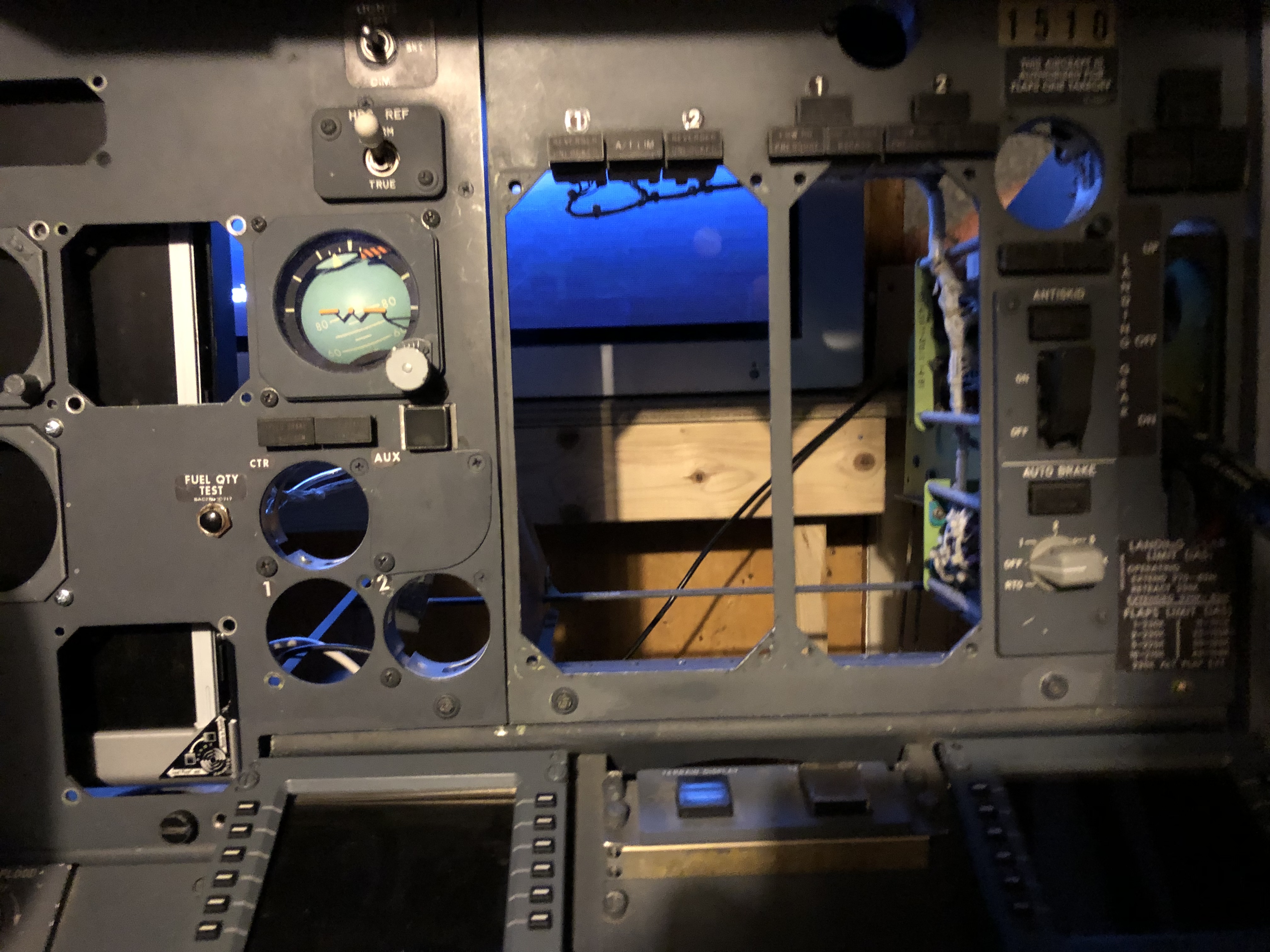 This ‘gap’ is the next to be filled. I have the software working for the engine displays, now I need to source an LCD panel which will fit the gap. I am only driving the left side display, the the right being a dummy. Once I have the dimensions sorted I’ll start rummaging around in my stash for a suitable monitor, or failing that it’ll be off to my favourite ‘Sim Supply’ store; AliExpress 😉

Over the weekend I spent a little bit of time getting the pilot seat for the 737 working, and set it up in the sim to try out. To ‘properly’ test it, of course, meant a test flight… So in the spirit of remembering the RNZAF’s participation in the UN Rwanda relief mission I flew the 737 from Nairobi to Entebbe, where the airlift HQ for the operation was based.

The weather was pretty good leaving Nairobi, but crossing Lake Victoria the weather deteriorated, with heavy cloud and reduced visibility at Entebbe airport.

About 40 Nautical Miles out of Entebbe, and well into our descent was the last time we saw the ground until we were passing 300ft on approach, so poor was the visibility!

From the initial approach fix, all the way to 300ft was a world of grey. After touchdown it was a fairly long taxi to the cargo ramp, and the end of a successful test flight. The flight went well, but the seat didn’t. I will need to lift the seat an additional 30-40mm to make it the perfect height for me… that’s the next job, then I’ll probably need another test flight, but that’s for another day.

25 Years ago a C-130 of the RNZAF flew in the UN humanitarian support mission to support those escaping the genocide in Rwanda. I thought it might be a good mission to re-create for the B737, operating between Entebbe in Uganda and Goma in the Democratic Republic of Congo..