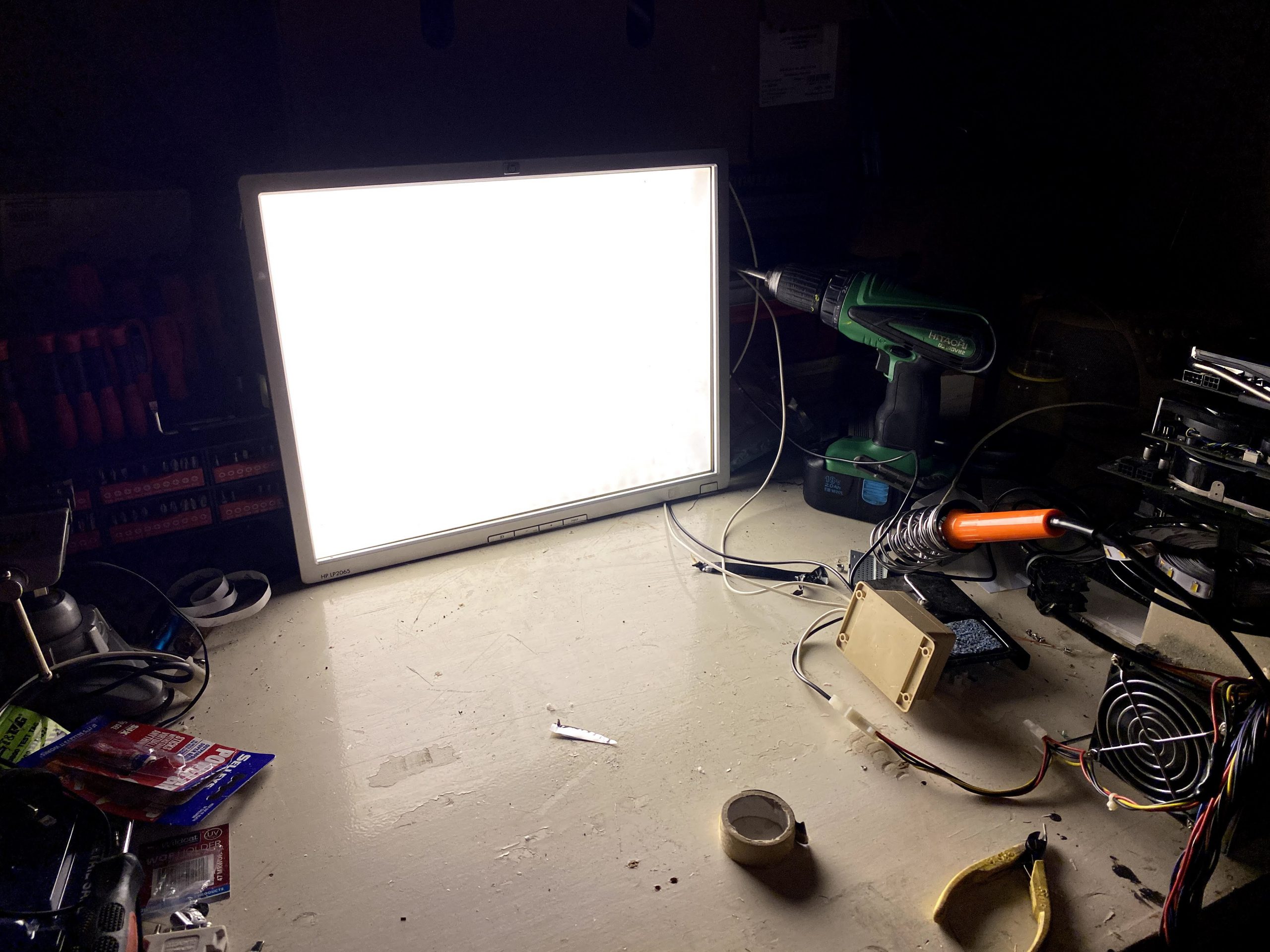 A random youtube link led me to some interesting elctronic projects, one of which I could see had potential for my simulators.. that was; creating ‘fake sunlight’.

The concept was based on up-cycling old LCD monitors or TV’s, utilising components of the display to ‘colimate’ the resulting light, creating a near parallel light source.

Often when you see things like this on the internet you wonder whether they actually work, or if the results portrayed on the ‘net are exagerated. Well this time the results matched, or even exceeded what I saw.

For my experiment I used an old HP 20″ monitor (from my stash…). Stripping the monitor down took less that 1/2 an hour, and was exactly as described in the Youtube video.

In the instructions ‘DIY Perks’ suggested using Cool-White high density LED strips. I didn’t have any, so instead used Warm-White, standard density strip. This meant that my fake sunlight was going to be a warmer hue, and not as bright as the recommended strip.

The initial fire-up and test was pretty underwhelming, with the panel only giving off a fairly ‘soft’ light. It wasn’t until I looked around the room and discovered that the light was roughly the same brightness at the far end of the room as it was close to the source, which was a strange phenomenon to see! Because of the fresnel lens and diffusers in the monitor the light doesn’t ‘fall-off’ in the same was as a conventional lamp, it also creates near-parallel light beams, which means that shadows look a lot like those you will see from sunlight. Both of these phenomima combine to convince your brain that it is actually sunlight.

This small experiment showed me the potental of these lights for creating ‘sunlight’ in my simulators. I plan on trying this lighting in the 737 sim first, where I can mount the light outside the window, shining down into the cockpit. Long term I would like to implement a PC controlled dimmer which could control the level of daylight coming into the sim based on the time of day. Possible extension of the idea is to use high density RGB LED strips, which would let me control not only the level of light, but also the colour. Imagine white light during daytiume, subdued red during dawn and dusk, and soft blue during night-time….