Despite the rubbish weather at Ohakea, I had a really successful night of testing FSRecorder in both the TA-4 and Arrow sims.

First I flew (and recorded) a track in the Arrow, shooting rockets at various things out at Raumai, with the previous TA-4 tracks as a background.

Then I fired up the Skyhawk, and loaded both TA-4 tracks, as well as the new Arrow-as-a-FAC track..

After a couple of entertaining flights, I can see that my ideas and plans for FSRecorder are entirely plausible…   A couple of issues with effects displaying to sort out, then more testing with different “weapons” effects and I’ll be read to plan a multi-aircraft scenario to record.

I was planning on upgrading the sim PC for the Skyhawk, but got distracted and ended up getting the new PC up and running for the Arrow!

After a quick “test” flight around Christchurch, a little FSUIPC tweaking, and some tinkering and it is all working remarkably well!  Next step is to do some graphics tweaking to maximize performance, then it will be time to start exploring NZ again!

And it’s true!   Tomorrow night I have some friends coming to fly the sims…. and the ManCave was is a real state!  The Skyhawk had it’s throttle out, awaiting installation of a new throttle , the Arrow had no pilot seat… and there was *CRAP* everywhere, stacked on every available flat surface.

So, tonight was a huge working night on the sims, and finally a big tidy up of the ManCave.

I mounted the new Thrustmaster TWCS throttle in the left console, which meant removing the left side outer skin, removing the old throttle and it’s associated wiring, then re-positioning the panels behind the throttle, to match the new footprint.

Since I had the drill out I figured I might as well finish off the mounting for the Gear and Hook panels, by attaching them permanently.  I also finally screwed down the aft end of the left side console and tidied up a bunch of cabling where it runs out the front of the panel.

With it all screwed back together and the outer side panels in place (the first time they have both been on the sim at the same time in years!) I thought I might as well fit the insulated lining on the right sidewall.

Next the Arrow got some attention; since it will probably be flown tomorrow I figured it probably needed a pilot seat, as the 737 Pax seat is just leaning on the wall next to the sim, so not a whole lot of use.   A couple of blocks of 4×2 and some long screws and it is a little more secure.  Though it is still not the right height, it is certainly better than it was.

The final part of the evening was getting all my ‘IT’ ducks in a row, so to speak.  at some point in my tidying I had inadvertently disconnected an Ethernet cable, effectively isolating the skyhawk sim, and server from the rest of the network, and the outside world.

With all the issues sorted, it was time to bed the sims down and call it a night.

Just when you thought I’d abandoned the Arrow project…..   I ordered some seat sliders as part of the conversion of my 737 passenger seat for the Arrow. 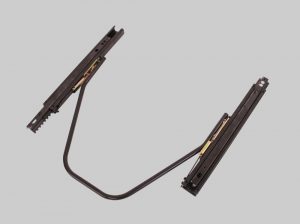 These seat runners come from scarles.co.nz who provide loads of car parts for custom/race car builders.  I’ve used these universal rails on a project at work and the will be perfect for the arrow seat, and at $55, the price is right too!

Actually got lots achieved last evening.
Biggest news is that my MCP has arrived, and it is in immaculate condition.  This of course called for a quick test of all the avionics hardware and software. 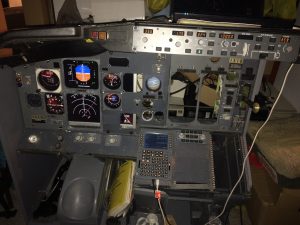 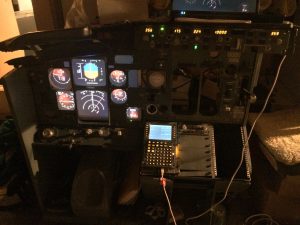 While that was all going on I test-fitted my 737 passenger seat into the Arrow, and though it still needs to be lowered a little, and have some tidying up where it was cut, it works really well. 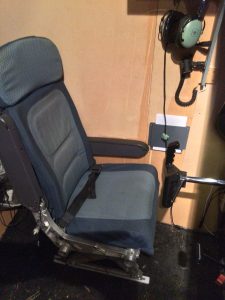 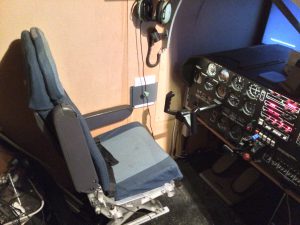 And Finally, after much huffing and puffing the TV for the 737 visuals has made it up the stairs and onto it’s mount.  I knew it was big, but man it looks huge when it’s sitting in place!

With any luck I can get the MIP upstairs and actually fly the sim with everything in the same room!

This time the Arrow got some new paint!   For some of my ideas for multiplayer missions I saw the Arrow acting as a Forward Air Controller or ‘FAC’, and for that it would need a completely different paint scheme.  I whipped up this completely fictional paint as NZ1770, an Arrow IV FAC aircraft attached to No.14 Squadron…. 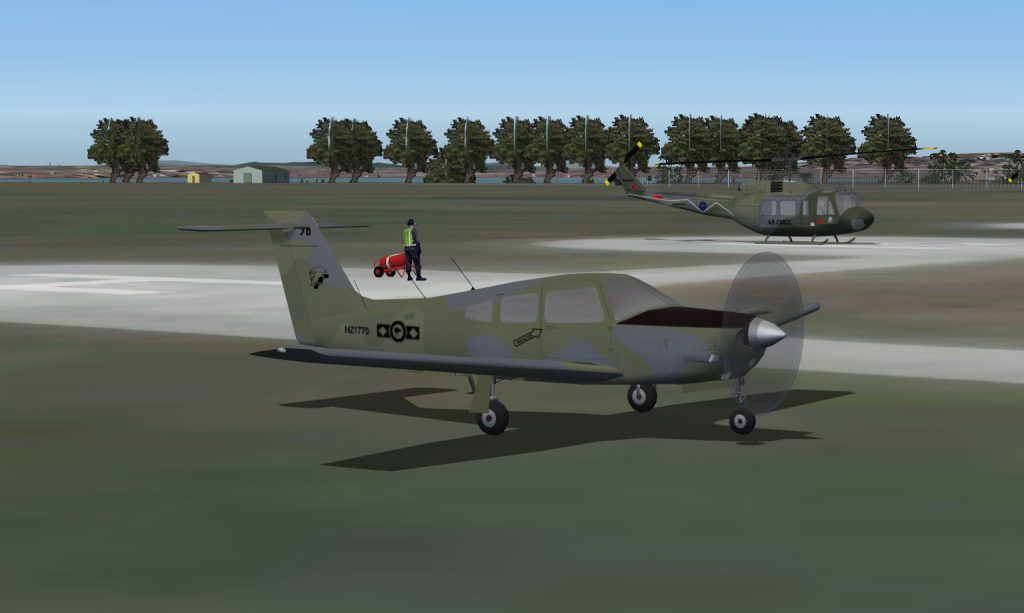 Didn’t come out half bad I thought!  So next up is the 737 in either tactical grey, or the same “Euro 1” colours……

Jenny upgraded her phone, which left her old phone spare….   So now the Arrow has a smaller, but much faster GPS display.  Still running FSRadioPanel, but on a much better device it is way more responsive. 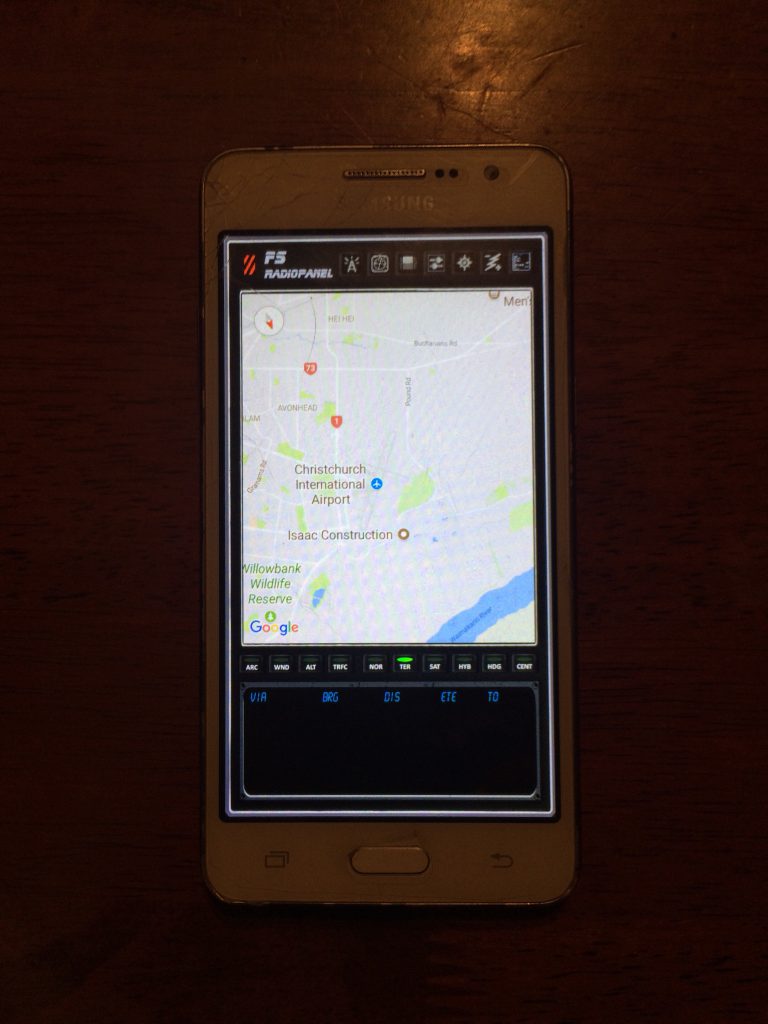 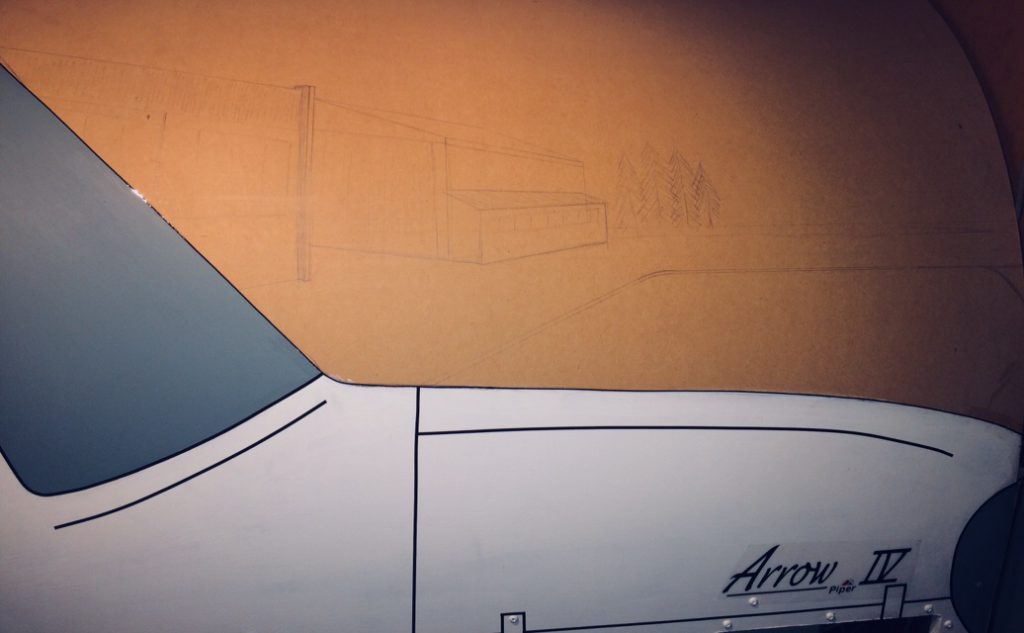 Doesn’t show very clearly in the photo, but I messed around sketching what the background might look like on the Arrow’s shroud..
It’s supposed to be “reminiscent” of the ramp at Wigram…..  Due to my complete lack of artistic skill, it is going to be block colours and black stripe outlines….  but should look ok… I hope

Today, after finishing work on a customers sim at Bankstown Airport, I drove around being nosey, and found a business that scraps GA aircraft.  They had this Arrow 2 parked outside, not necessarily to be scrapped, but has been sitting there for a long, long time!
I am going back tomorrow to talk to the owner of the business about some interior parts for my Arrow…. 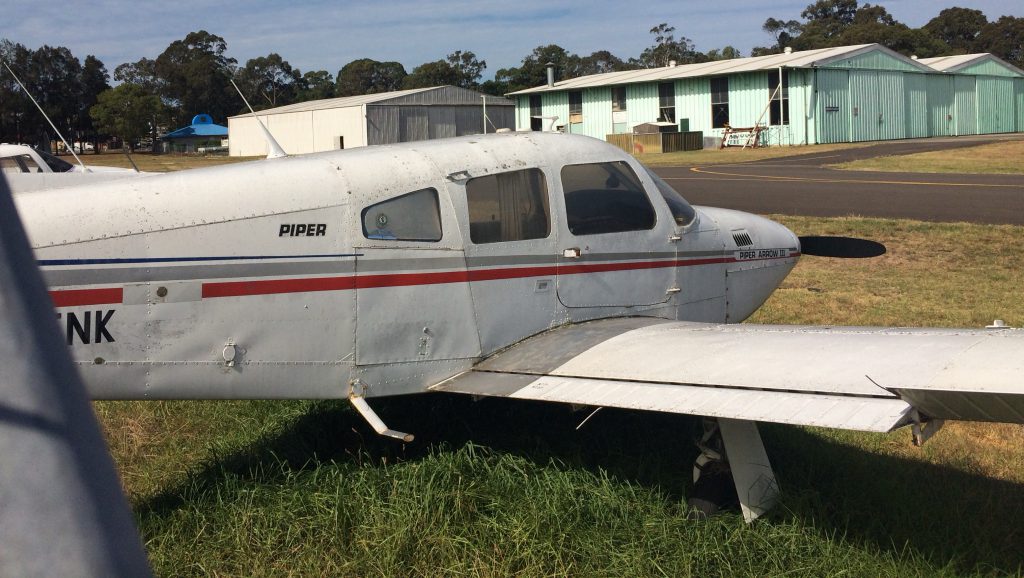 This was just one of the aircraft sitting around in the long grass.  There was even a Chieftain (I think) fuselage sitting in front of the hangar which had windscreen, flight controls, throttle quadrant and even some instruments still in it! 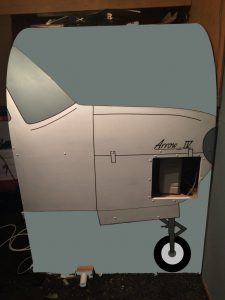 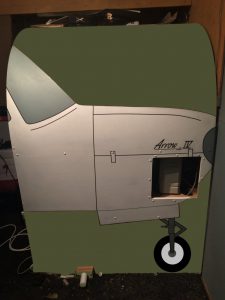 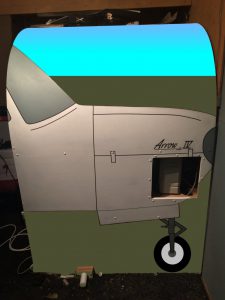 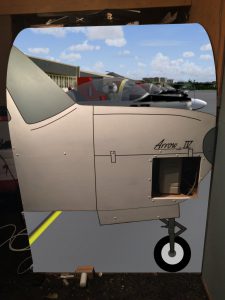 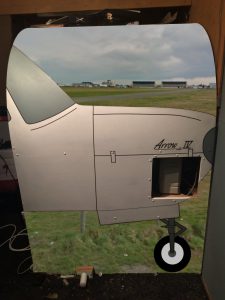 These are some of the options that have been suggested for the Arrow “Background”.  I need to decide which one I like the most, but also which one is within my artistic capabilities!  There is the option of getting vinyl printed for a photo background, but that would be more costly (unless I try China…)