After the developments in DCS over the past couple of months I have had a significant change in thinking on how I will operate my sims. Up till now I have been working on a single, standardized software install across all my sims, but with the recent DCS developments, and some recent experiences with Orbx scenery in our sims at work, I have had a major rethink on my plan.

With my recent experience in DCS I realized that work I had been doing on my ‘TACOPS’ application was basically trying to replicate what DCS has bulit in.

So. Big decision, but now my 3 main sims will be running *different* software as their primary platform:

DCS:Combined Arms has been a bit of a revelation; I bought it for the JTAC role, but once I had it installed and running I discovered that I had unwittingly bought the Tank simulator which I have been looking for since the days of ‘Armored Fist’ from Novalogic.

Combined Arms allows you to control ground forces in the DCS Digital world, and to assume control of individual vehicles. This means that I can free-roam around the map in a Humvee, driving wherever I like, sight-seeing or designating targets for pilots in the mission.

This new philosophy means that each sim will be working to it’s own strengths, rather than focusing on interoperability. This does mean that I wont be trying to make the Arrow or 737 be anything other than what they are, and I wont be trying to turn FS9 into a pseudo-combat sim.
The switch to DCS allows me to leverage of a true combat sim, with robust multiplayer, a complex mission scripting system, giving me the ability to build realistic missions for the Skyhawk, and with the former-F421 PC running DCS as well, the mission options are pretty wide ranging.

The Skyhawk will be running both VR and 2D, using the Community A-4 mod, and one of the DCS ‘Panel’ utilities to render a 2d panel on the lower screen in-cockpit.

The switch to DCS will finally allow me to have systems operating which have been merely a dream before now. A good example is the RWR display, which Icarus can render on a small monitor which I can mount behind the RWR display in the main panel.

After the development work on TACOPS over the past few weeks, it was time to put it all to the test.  Nathan and I fired up all three sims, plus the Tactical-Commanders station, Canterbury and a Navy RHIB.  The testing plan involved flying and sailing all the assets into the same location, and testing radar and ibnet ‘visual’ contacts on each.  The location for the test was the Bay of Plenty, Tauranga and Whakatane for the aircraft, and White Island for the ships.

The first part of the mission; the locating of all assets, meant a quite long flight in the Arrow, which was at Wigram all the way North to Whakatane.  The positioning flight began on Thursday evening in awful weather.  At one point, battling a terrible North West gale I had a mere 70 Knots ground speed, so I opted to drop in to Kaikoura for the night and try again the following evening.

Friday night, the weather was marginally better, but only marginally, but with tanks topped of and charts in hand it was time to push North.  The initial plan was to position the Arrow to Galatea, but given that the airfield has no lighting at all, and it was going to be near midnight by the time I got there, I opted to continue on to Whakatane, with not only lighting, but published instrument approaches (which would turn out to be quite a good thing!)

Now, with everything in place it was time for our test ‘mission’, so bright and early on Saturday we powered up all the sims and started our testing.

We identified a few missing aircraft models on a couple of the sims, which were quickly fixed, then we moved on to the ‘radar’ testing.

TACOPS provided the radar targets, which were showing successfully on Eric Marciano’s early, freeware radar gauge, but not on his later, and much more sophisticated gauges, nor were they showing on the 737’s Project Magenta Glass Cockpit display.
‘ibnet’ Multiplayer targets were showing on Eric’s later gauges, but only when airborne (which I imagine was by design).  So with this knowledge The Skyhawk will be fitted with the older radar gauge for use against Maritime and Land based targets.  The down-side is that the locked targets probably wont be showed on the HUD… but that is merely a theory at this point and will need some testing!

Tonight, while working on a small work project (yes I can multitask…) I got a simple GPWS package working for the 737 sim.  This is a ‘gauge’ which runs inside FS and makes all of the standard callouts.  Simple but effective 🙂

After a quick installation on my test machine, and some sample approaches it all appears to be working pretty well, and definitely good enough for the 737 sim!

The gauge was developed by Rob Barendregt, who has made a huge range of useful, and slightly ‘left field’ gauges for FS.  Look for rcbgp-33.zip at all the common FS sites.

Just another photo from my night flight over South Korea.. 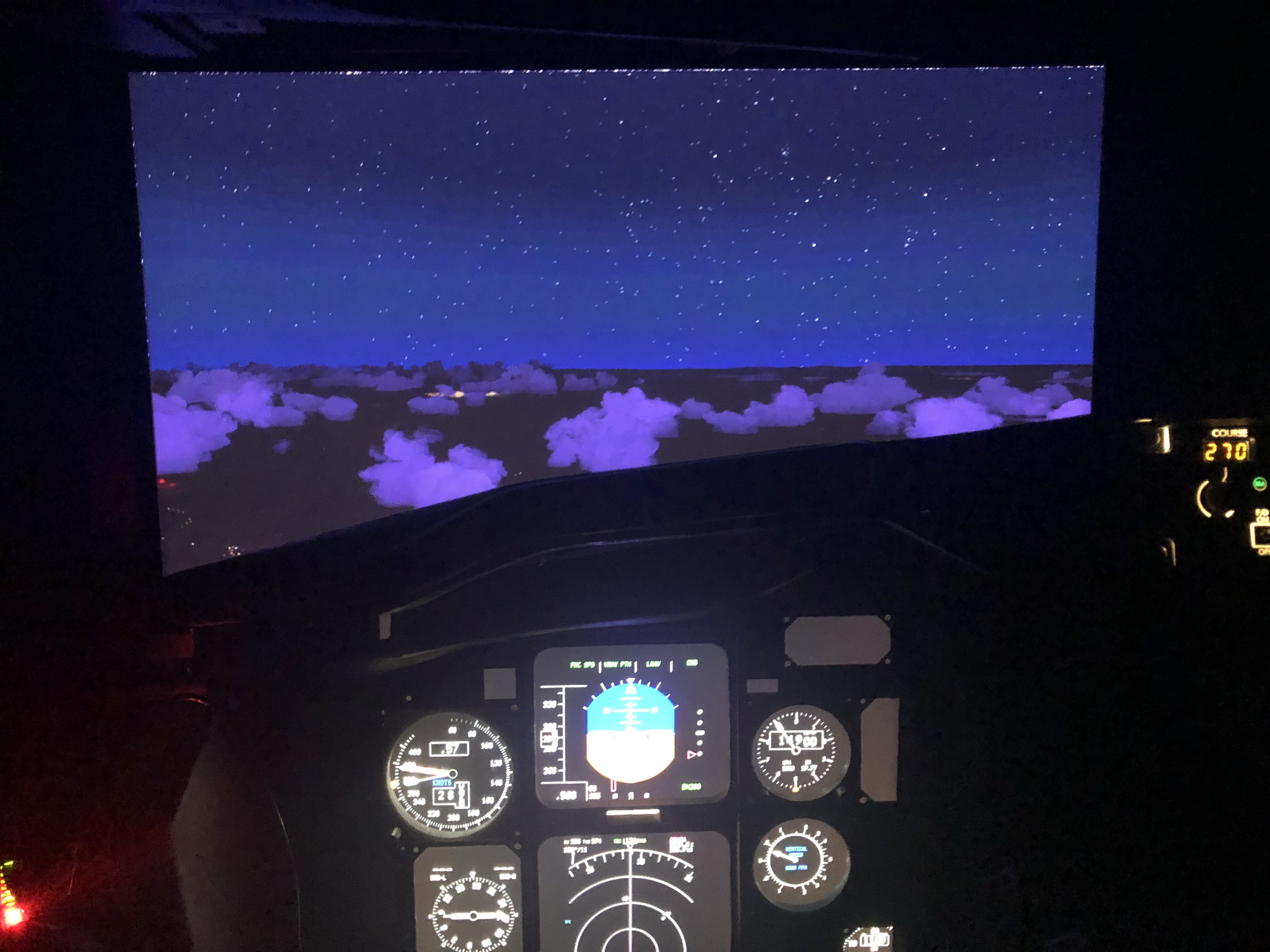 I am really enjoying exploring South Korea, both in the air and by sea. 2 very different perspectives on this beautiful, and varied country.

Canterbury has continued her ‘Port Hopping’ adventure around the Eastern and Southern coast of South Korea, visiting ports in some truly spectacular scenery.

Tonight, after a day-long cruise through the myriad of small Islands around the South coast, Canterbury was coming in to Port in Mokpo, so I decided to fly the 737 down tomeet her.

Departing at dusk from Osan, then a quick flight down the West coast had us arriving overhead Canterbury just after dark.

Mokpo airport closed in 2006, due to a number of reasons, but in my world, it was still operational 😉    One of the reasons the airport closed was the “frequent misty weather”…. which is what I encountered tonight!

After the flight, with Canterbury and the 737 bedded down for the evening, I fired up DCS:World, and had a quick test flight in the Macchi around Nellis.   I now have 3 versions of DCS installed on the PC, each with their own benefits……   The primary benefit of the ‘Steam’ edition is that it is the only one compatible with the version of the Nellis ‘NTTR’ terrain package.

Brent, long time friend and complete sim-nutter visited the ‘cave again tonight with a specific mission:  To have a ‘go’ with VR, and DCS:World.

After screaming around in the Macchi, then the mustang (keeping it Kiwi!) and uttering oaths about how good VR was, I shifted him into FSX with “FlyInside”.   Brent stated that he wasn’t keen on helicopters in FS, and had never really gotten the ‘feel’ for them… so obviously I put him straight in the Bell 206 JetRanger, which he flew with no real problems!  VR is incredible for making you feel as if you really are flying.  More oaths, more smiles, then it was time to switch to the Skyhawk sim, and catch up on all the improvements that have happened since his last visit.

The Skyhawk hop was just a quick blat out to the Raumai range, as ‘dash 3’ in a flight of Skyhawks, fly a couple of guns passes, chase the FAC Arrow around then return to Ohakea.  Gun camera footage to follow showing just how close he got to the Arrow 🙂

Then as a final flight of the evening we headed upstairs to have a first look at the 737 Classic.

A quick blast-off from RKTH, then an orbit over the bay to spot HMNZS Canterbury, and back to the field for a visual approach and landing.

A good, fun evening exploring lots of different aspects of our hobby!

Tonight I decided that it was time to put together a very simple mission into North Korea.  Primary platform was the Skyhawk on a tactical recon of some smaller airfields around Wonsan.   The 737 was orbiting just South of the DMZ, and Canterbury was ‘hiding’ behind an Island off the coast of Wonsan.  The idea was to rendezvous with the 737 on the way North, then descend to low level for the tactical part of the mission.  After Wonsan, I would do a fly-by on Canterbury, before heading back down the coast, via the final airfield in the mission.

Even before the mission got going there was a setback with my plan;  The 737 lost *half* of the CDU display, making it basically useless.  So the plan for the 737 was changed, on the fly, and launched without a functioning FMS!

The weather was pretty awful, with turbulence and rain at 15,000ft, but lower down it was far, far worse, with low cloud and bad visibility.

At the first ‘target’ airfield I encountered a concentration of AAA, and had a quick snap-shot at them as I passed….”honor the threat” as the  strike guys say 😉    Next up was a quick pass over Wonsan airfield for a couple of photo passes, then out to wave at the crew of Canterbury.

It was a great mission, but a shame the 737 has failed it’s CDU…. that just moved to the top of my list to repair!  Next time I want to roll some FS-Recorder tracks into the mix, with maybe some FAC action in the Arrow…

0.9 Hours in the log, a bunch of photos… now it’s time to build on the mission and bring more elements into play!

Tonight I spent a bit of time downloading, installing and configuring scenery and AI for an upcoming event (to be announced here soon!).  After everything was sorted I flew a quick test flight to make sure all the new elements were working together in the sim.

This evening, after a refuelling stop at Shanghai, Pudong Airport we blasted across the Yellow Sea, headed for Osan in South Korea. 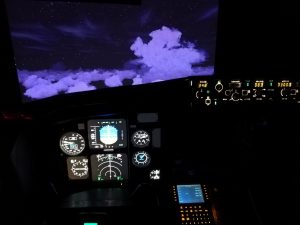 Once we get to Osan I hope to try out some of my Multi-player mission ideas…. More on that later!